pitcherIn a natural amphitheater, the vineyards of Bandol is staged in terraces on approximately 1500 hectares. The area of appellation covers eight towns suspended between the earth and the mountains, in southern Massif of Saint Baume Bandol, La Cadière d'Azur, Saint-Cyr-sur-Mer, Le Castellet, Le Beausset, Évenos, Olliouiles and Sanary.

In the VIth century BC, the Phoenicians landed on the shores of what would become their Torroeis colony, bringing in their amphorae civilization of vine and wine.
(Under the Roman Empire, Torroeis takes the name of Torroentum.)

The National Institute of controlled appellation of origin (AOC) recognized BANDOL as one of the first AOC in 1941.

The wines of Bandol

The Grenache and Cinsault grape varieties complement the red vines.

Young vines dedicated to the red wines are admitted for the appellation after the eighth leaf (8 years). The Red wines are aged in oak cask at least 18 months. 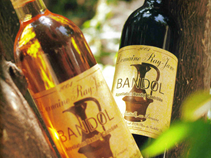